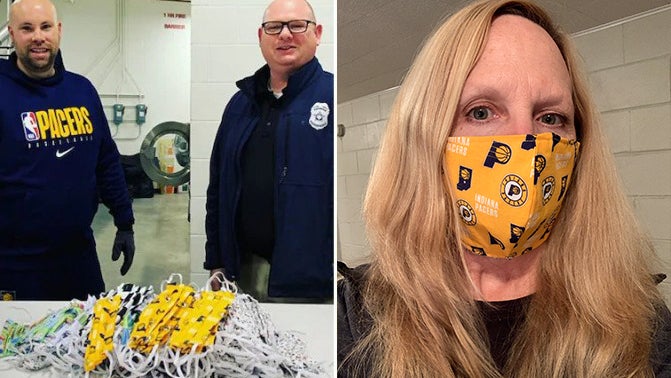 When the NBA season was suspended due to COVID-19 last month, an email circulated through the Pacers offices encouraging employees to utilize their time in a productive manner. Learn a new skill, perhaps, engage in some form of self-improvement or study a new subject.

It figures, really. Conder is the Pacers’ Equipment Manager and Miser is the Vice President of Engineering and Construction for Pacers Sports and Entertainment. They’ve got a natural inclination toward making and supplying things, and masks have been at the top of everyone’s list of items of that need to be made and supplied.

“Everybody across the country needs a mask,” Conder said.

He had to start from scratch, which meant purchasing a sewing machine, fabric, and elastic and teaching himself what to do with it all. He had always wanted to develop sewing skills in case he needed to make a quick repair of a torn uniform or attach a patch to a jersey, and this was the perfect opportunity. He faced an early delay because he had to take the machine in for repair almost immediately — either he broke something or it was defective, he didn’t yet know enough to know — but then went to work.

A few of his first efforts had to be tossed, naturally, and his first usable mask took about 45 minutes to complete. But now that he’s got the hang of it, he can make 10 or more during that time. He’s made about 160 so far. He donated 100 to a police officer who is a member of a homeless task force, and he’s given about 20 to relatives and friends, including some of the players and their wives.

He has no plans to stop.

Miser had a head start on Conder, having already acquired some sewing skills. Although she’s still busy with construction and engineering at The Fieldhouse and still making occasional trips into her office, she’s found time to make about 100 masks.

“I’ve had a sewing machine since I was a kid and messed around with it,” she said. “I can make table clothes and curtains, anything in a straight line and no zipper. But I saw all this stuff on social media about how to make masks, so I thought I’d give it a shot.”

Miser has incorporated various patterns into her masks, including some with the Pacers logo. She started by giving them to security team members at the Fieldhouse and practice facility but has since branched out to supplying family and friends.

She was delayed early on by the lack of available elastic (“about as hard to find as toilet paper.”) but once her order arrived last week, she’s kept a steady pace. When time permits, she can crank out six to eight per hour.

“There’s women out there who have made hundreds. That’s not quite me, but I wanted to do something to help the (virus) situation because I’m concerned about it.”

Have a question for Mark? Want it to be on Pacers.com? Email him at askmontieth@gmail.com and you could be featured in his next mailbag.

Mark Montieth’s book on the formation and groundbreaking seasons of the Pacers, “Reborn: The Pacers and the Return of Pro Basketball to Indianapolis,” is available in bookstores throughout Indiana and on Amazon.com.

Note: The contents of this page have not been reviewed or endorsed by the Indiana Pacers. All opinions expressed by Mark Montieth are solely his own and do not reflect the opinions of the Indiana Pacers, their partners, or sponsors.