KANE BROWN ANNOUNCES 35 CITY NORTH AMERICAN BLESSED & FREE TOUR WITH A STOP IN INDIANAPOLIS, IN ON JANUARY 6 AT GAINBRIDGE FIELDHOUSE

Registration for Kane Brown’s pre-sale begins Thursday, April 8th at 11a.m. EST  at kanebrownlive.com. Tickets for Blessed & Free will go on-sale to the general public Friday, April 16th, at 10am local time. A limited number of VIP Packages will be available.

These exclusive offers include an amazing selection of tickets, early-access to the General Admission Pit, limited edition merchandise and much more. Visit kanebrownmusic.com for a full list of tour dates, additional pre-sale and ticket on-sale information.

Brown made the announcement from the American Airlines Center in Dallas during one of his surprise promotional stops in upcoming tour markets. Starting October 1 in Sacramento, Brown’s Blessed & Free Tour will visit all 29 NBA basketball arenas throughout 2021 and 2022, making the “breakthrough entertainer” (AP) the first country artist in history to headline every NBA basketball arena in a single tour. A life-long basketball fan and former 4-sport high-school athlete, Brown first hinted at the tour during the 2020 NBA All-Star game in Chicago, where he played in the NBA celebrity All-Star game.

The country star is set to visit other iconic venues like Gainbridge Fieldhouse, including Brown’s first headlining dates at New York City’s Madison Square Garden and Brooklyn’s Barclays Center. Brown also returns to play the STAPLES Center in Los Angeles. Brown is among a handful of country artists in the arena’s 20-year history to sell-out the venue.

Noted as the “future of Country” (Billboard) and one of “31 People Changing the South” (Time), the chart-topping entertainer recently earned his first ACM Album of the Year nomination for Mixtape Vol. 1, as well as a Video of the Year nomination for his anthem “Worldwide Beautiful.” Brown first broke through the country charts with his #1 self-titled debut, which spent a record-breaking 13 weeks at the top of the chart and made Brown the first artist in Billboard history to Top all 5 Billboard Country charts simultaneously. Kane Brown earned three AMA Awards and produced two of the most streamed country songs of all time--the 7X platinum #1  hits “Heaven” and “What Ifs.”

Brown’s sophomore album Experiment debuted #1 on the Billboard 200 all-genre chart and solidified Brown as the only male country artist in more than 24 years to debut at the top of the Billboard 200. Experiment produced back-to-back #1 hits and was ranked by The New York Times as one of the Top 10 Best Albums of the Year. His latest project, Mixtape Vol. 1 features Brown’s Top 10 pop radio hit “Be Like That” featuring Khalid and Swae Lee, his co-written duet “Last Time I Say Sorry” with John Legend, and his current hit at Country radio “Worship You.”

Fueled by Marathon, Blessed & Free marks the first tour for Brown since his Worldwide Beautiful Tour, which earned critical praise during its international run.

Restless Road’s (Zach Beeken, Colton Pack and Garrett Nichols) self-titled debut EP Restless Road was released to critical acclaim and catapulted the country music trio into the National spotlight.  Known for “harmonies that might make bands from the Eagles to the Jonas Brothers green with envy” and their “one-of-a-kind sound”(Pandora), the trio co-wrote three of the four songs on the EP and was later signed to Kane Brown’s label imprint, 1021 Entertainment. The multi-instrumentalists and impressive vocalists have been featured by NBC’s “Today,” Entertainment Weekly, Entertainment Tonight, People and more.  The trio are returning to the stage after opening for The Worldwide Beautiful arena tour, where they played to a sold-out crowd at the Los Angeles STAPLES Center opening for Kane Brown. For more information about Restless Road visit https://www.restlessroad.com

With nearly 2 million albums sold and more than 1.7 billion total streams, plus a legion of passionate fans at his high-energy concerts across the globe, Chase Rice has established himself as a powerful force in Nashville and beyond – yet he genuinely sees current single “Drinkin’ Beer. Talkin’ God. Amen.” plus recent releases The Album Part I and The Album Part II as the launching pad for music that says what he wants to say, how he wants to say it. With songs such as Top 10 single “Lonely If You Are” featuring sleek rhymes over heartland six strings mixed with EDM-laced drama, this is the same gravely-voiced Chase Rice fans first fell in love with years ago – but better. Freer. Unbeholden and uninhibited, somehow capable of evoking Chris LeDoux and The Chronic, campfire singalongs and stadium anthems, all at once. The series follows his sophomore album, Lambs & Lions, released with Broken Bow Records in 2017 and featuring the Double-Platinum, two-week chart topper “Eyes On You” – Rice’s first No. 1 as an artist and the most-streamed song of his career. Lambs & Lions followed Ignite the Night, which debuted at No. 1 on Billboard’s Top Country Albums and No. 3 on the all-genre chart, producing a pair of Top 5 hits; “Ready Set Roll” and “Gonna Wanna Tonight.” In addition to supporting Kenny Chesney’s The Big Revival stadium tour, Rice has consistently sold out 2,500-3,000 seat venues on his own headlining tours.

To get the pass, visit www.KaneBrownFanPass.com from your mobile phone. Sign up, download the pass, and make sure to hit the “Add” button on your phone to load the pass into your Apple or Google Wallet, and then stay tuned for some exciting tour surprises! 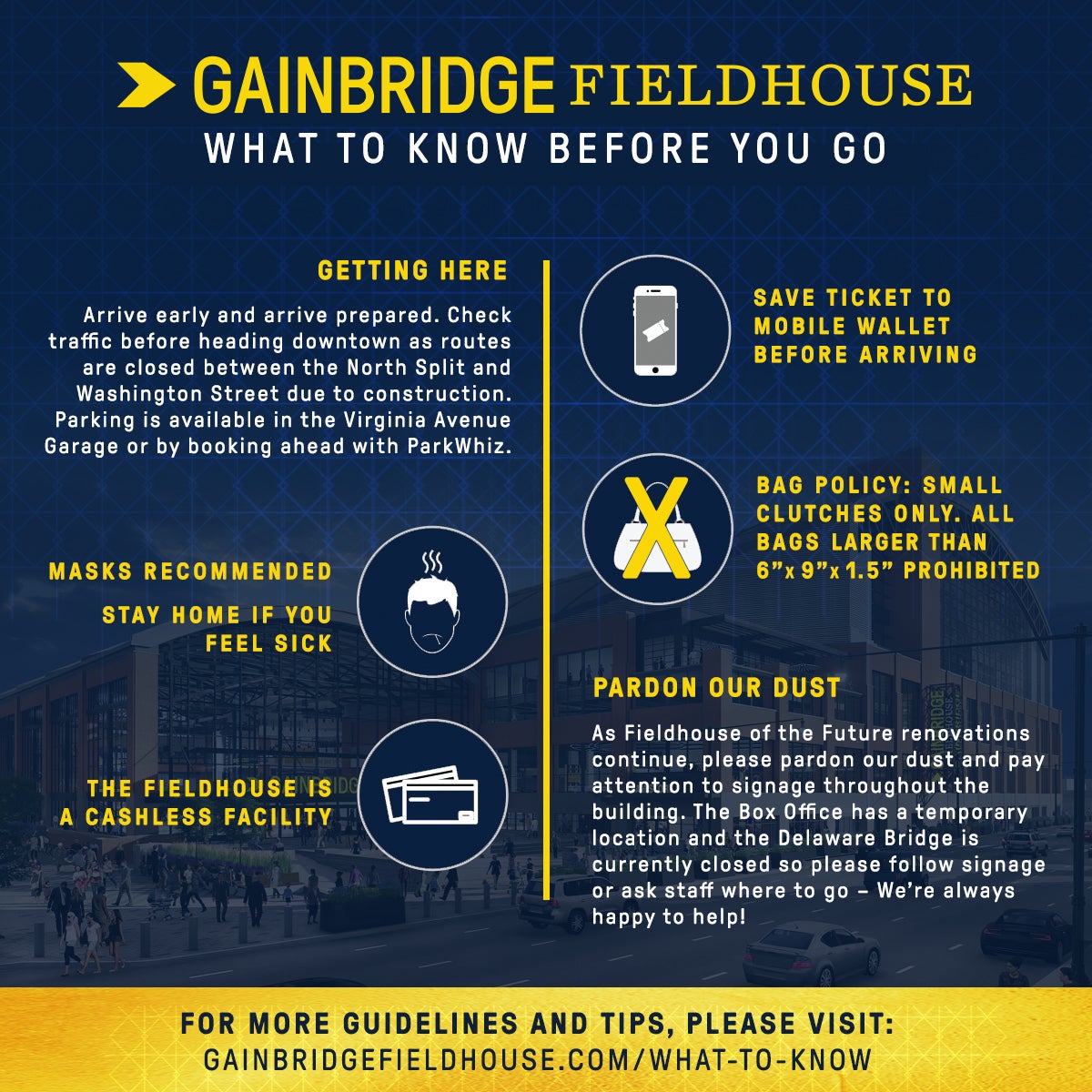 Gainbridge Fieldhouse follows Marion County Health Department (MCHD) and Centers for Disease Control & Prevention (CDC) requirements and guidelines from the promoter for each event. Proof of vaccination or testing is not required for general ticket holders at this event. The MCHD and the CDC recommend individuals wear masks indoors, regardless of vaccination status. Any further updates will be communicated to ticket holders and shared on our social outlets and this event page.